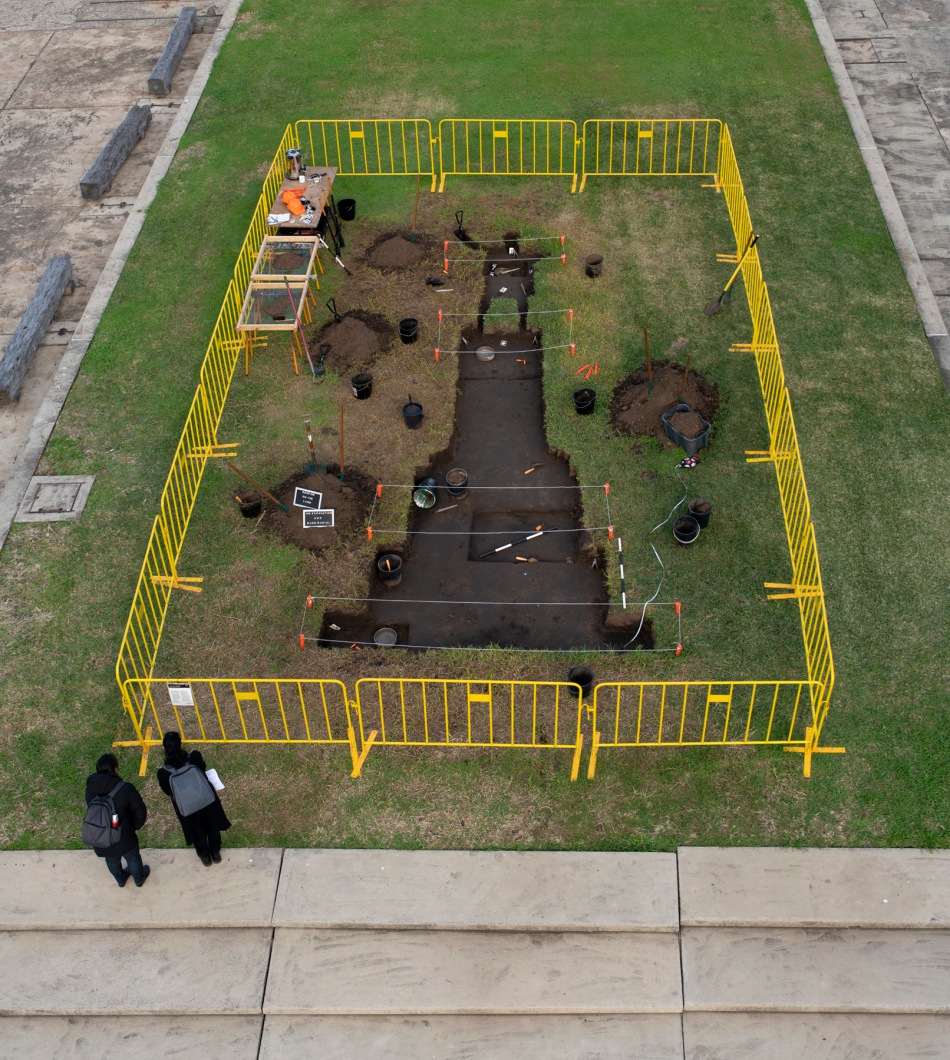 Hello! It’s time for the Best of 2020. Today we focus on Art. Found a really great article from artsy.net, titled The Best Public Art 2020 by artsy editors. I’m only doing five at the moment.

Nicolas Galanin, Shadow on the Land, an excavation and bush burial – Sydney, Australia 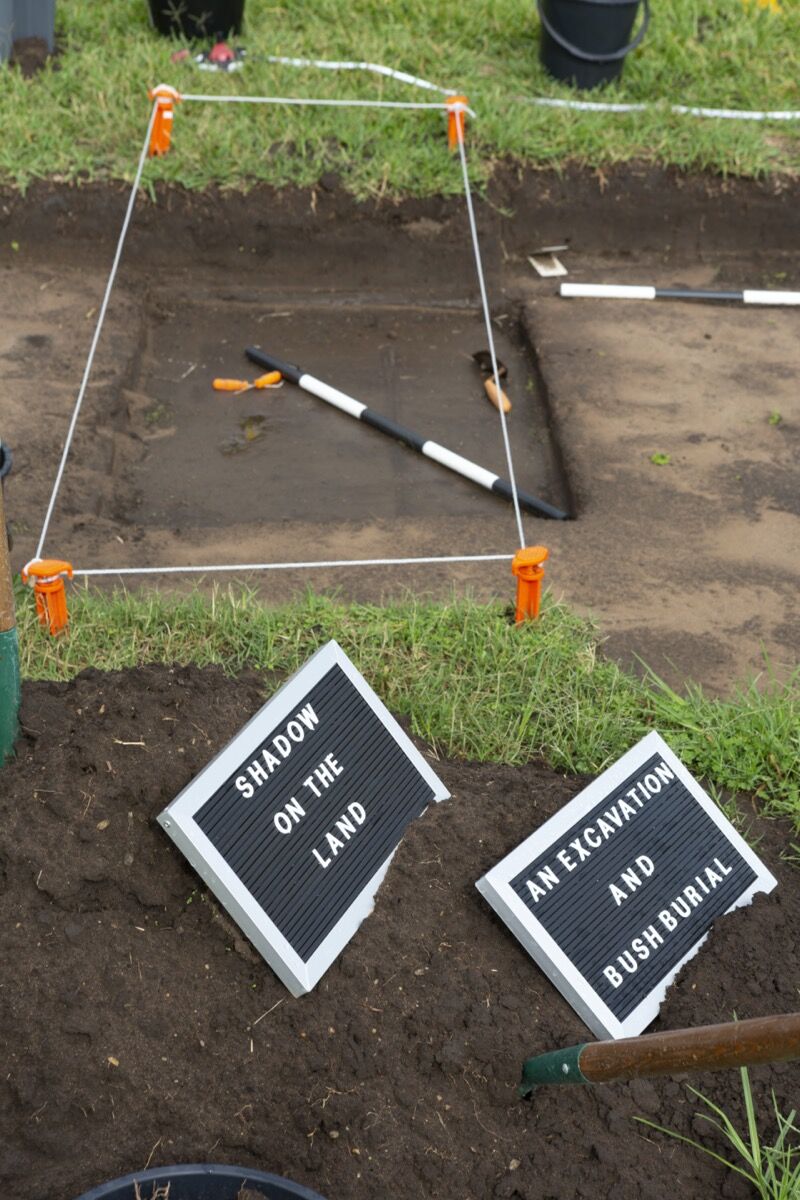 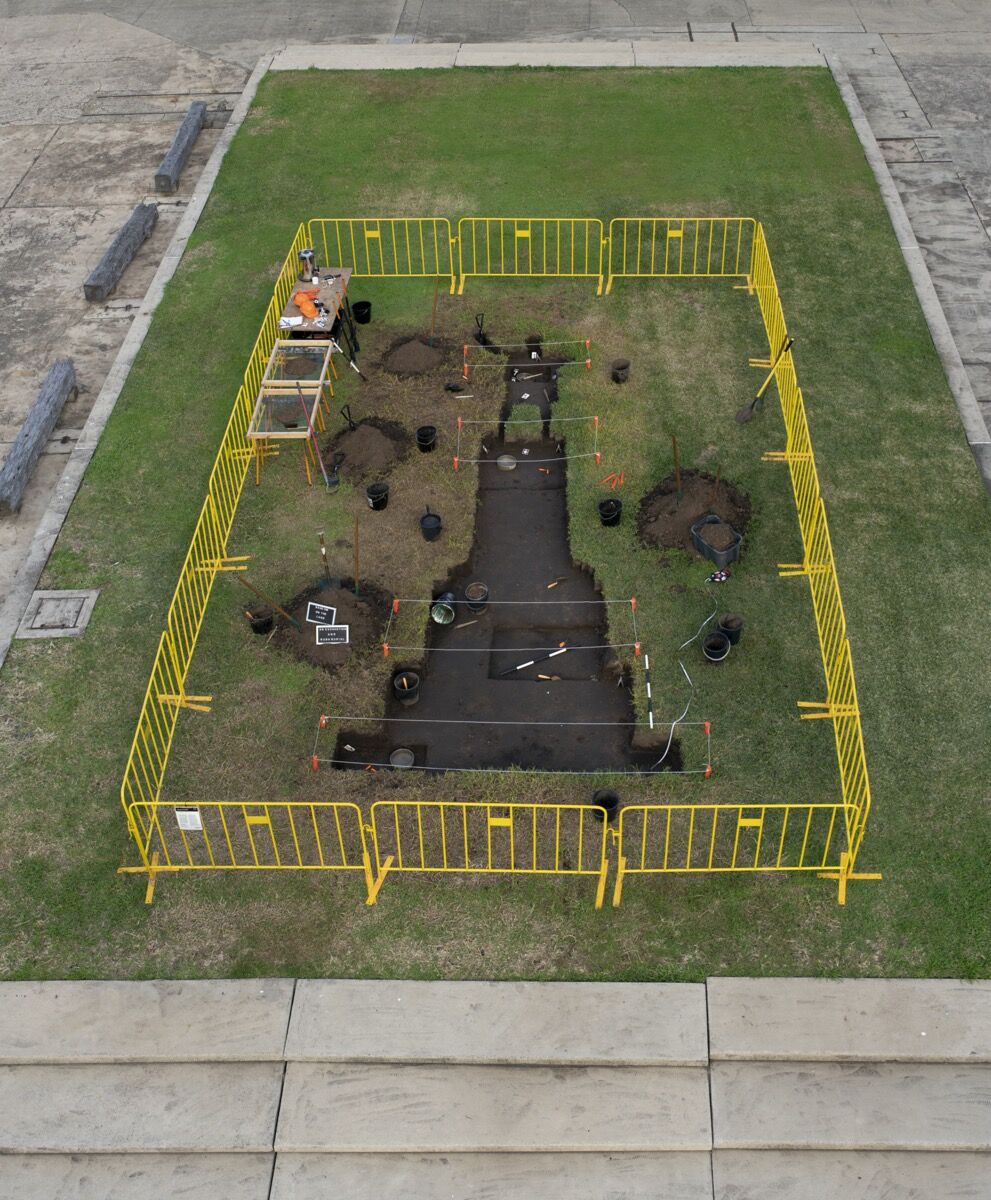 “
Nicholas Galanin
Nicholas Galanin’s site-specific public artwork on Cockatoo Island, created for the 22nd Biennale of Sydney, was a remarkable statement about Indigenous land and the myth of discovery. In Australia, at the beginning of the year, we were preparing to protest and challenge the official celebrations of the 250th anniversary of Captain Cook’s journey to Australia and the Pacific. Nicholas is a Tlingit/Unangax artist who lives in Sitka, Alaska, and his people also share these histories with Cook, who traveled up into Anchorage and renamed many of the Indigenous inlets, disregarding Indigenous knowledge and connections with the land. His gesture of a counter-monument was developed over nearly two years of visiting Sydney, getting a taste of the Australian colonial context and connecting with fellow Indigenous peoples from across Australia including Pedro Wonaeamirri in the Tiwi Islands.
Galanin’s final design was to excavate the shadow of the giant Captain Cook statue that dominates Hyde Park in central Sydney. Standing on Aboriginal lands of the Gadigal, it is inscribed with the giant slogan ‘Discovered this territory’ and has been the site of many protests and counter-inscriptions and spray-painted ‘No pride in genocide.’
“On Cockatoo Island, the excavation work took on the look and feel of an archaeological digging site, an action to metaphorically remove or bury the monument. The work opened in early March, in the lead-up to the official Cook celebrations in Australia, and interestingly it also really resonated with the counter-monument actions, which followed with the Black Lives Matter/Indigenous Lives Matter movement across the globe and the tearing down of statues to empire makers and slave owners that clearly connected international colonial legacies.”
—Brook Andrew, artist, curator, scholar, and artistic director of NIRIN, the 22nd Biennale of Sydney, 2020

Collective of artists, No Genta and ConTraconsciencia, Murals in the neighborhood of Estacio – Rio de Janeiro, Brazil 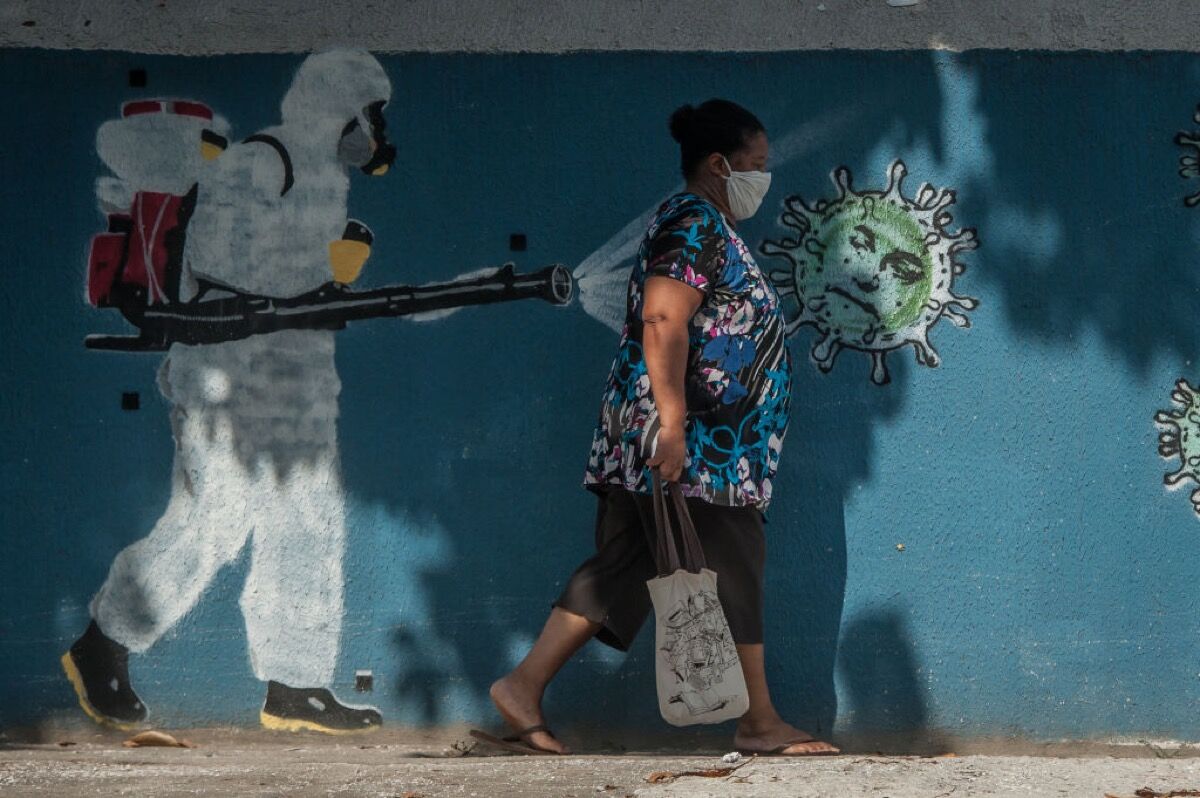 Collectives of artists NoGenta and ConTraConsciencia, murals in the neighborhood of Estacio, 2020. Photo by Allan Carvalho/NurPhoto. Image via Getty Images.

“This mural depicts a man performing disinfection and the face of President Jair Bolsonaro represented by a virus. Created using stencils and spray paint and during the dead of night, the work is critical of the president who has downplayed the seriousness of coronavirus, calling it ‘a little flu’; by August, it had killed over 100,000 people in the country and infected over 3 million.
“The image of this mural was picked up by news agencies worldwide, published by the BBC, The Guardian, Al Jazeera, and other outlets, becoming a hero art image to represent the complex mess of the pandemic played through politics of increasingly extremist or right-wing leaders who actively promote misinformation, and are like a virus themselves. Around the world and often, as with the community of Estácio, it is those with little wealth or access to health care who are affected by such epidemics.
“For me, the global circulation of photographs of the mural indicates the importance of collectives of artists and activists who work in anonymity, like the Sami collective Suohpanterror. They make powerful and affective imagery that speaks to urgent complex events of pandemics, environmental destruction, and racism.”
—Brook Andrew 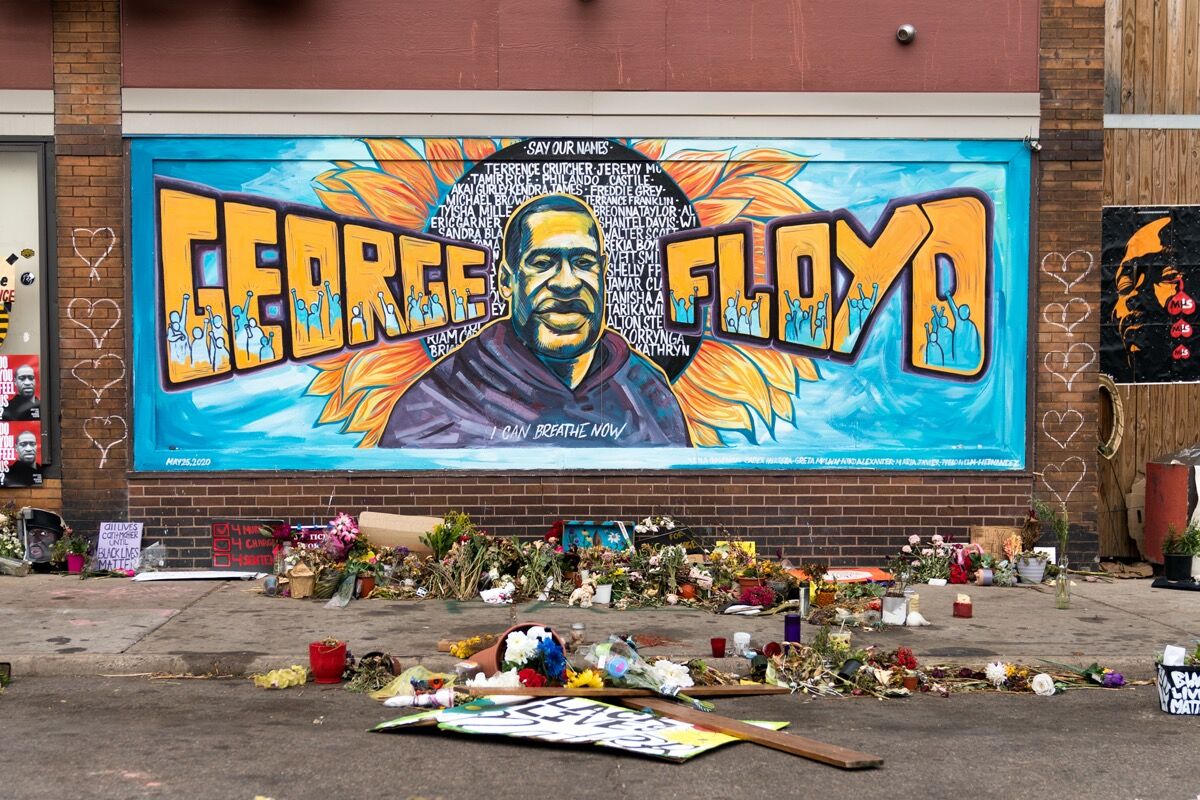 “This year we saw the walls of America being used by artists to memorialize and document a significant moment of our times. Painting George Floyd’s face and his words ‘I can’t breathe’ became a global act of critically articulating oppression and racism. Used as a symbolic image around the world, communities connected with the essence of the message that addressed injustice and living under brutality.
“Three days after George Floyd died under the knee of a Minneapolis police officer, artists Greta McLain, Xena Goldman, and Cadex Herrera, among others, painted a large mural on the side of a grocery store, near where the murder of George Floyd took place. The painting depicts a portrait of Floyd surrounded by protesters and embedded in a sunflower that holds the names of other African Americans who died due to police brutality. The words ‘I can breathe now’ were added as a request from the community to place a message of healing on the mural.
“Today, the location of the mural has received thousands of visitors and has instigated multiple community-led initiatives such as campaigning to name the area George Floyd Square. Artists have collected and archived offerings left next to the mural to document the community’s narrative in their struggle against racism. Multiple structures have been built on the site of the mural like a greenhouse that will hold the more than 350 potted plants left next to the mural by visitors, as well as a fully equipped medical shed.
“The mural of George Floyd appeared on the corner of East 38th Street and Chicago Avenue on May 28, 2020. It quickly became a representation of the grief suffered by its community and an inspiration for further civic action.”
—Manal AlDowayan, artist 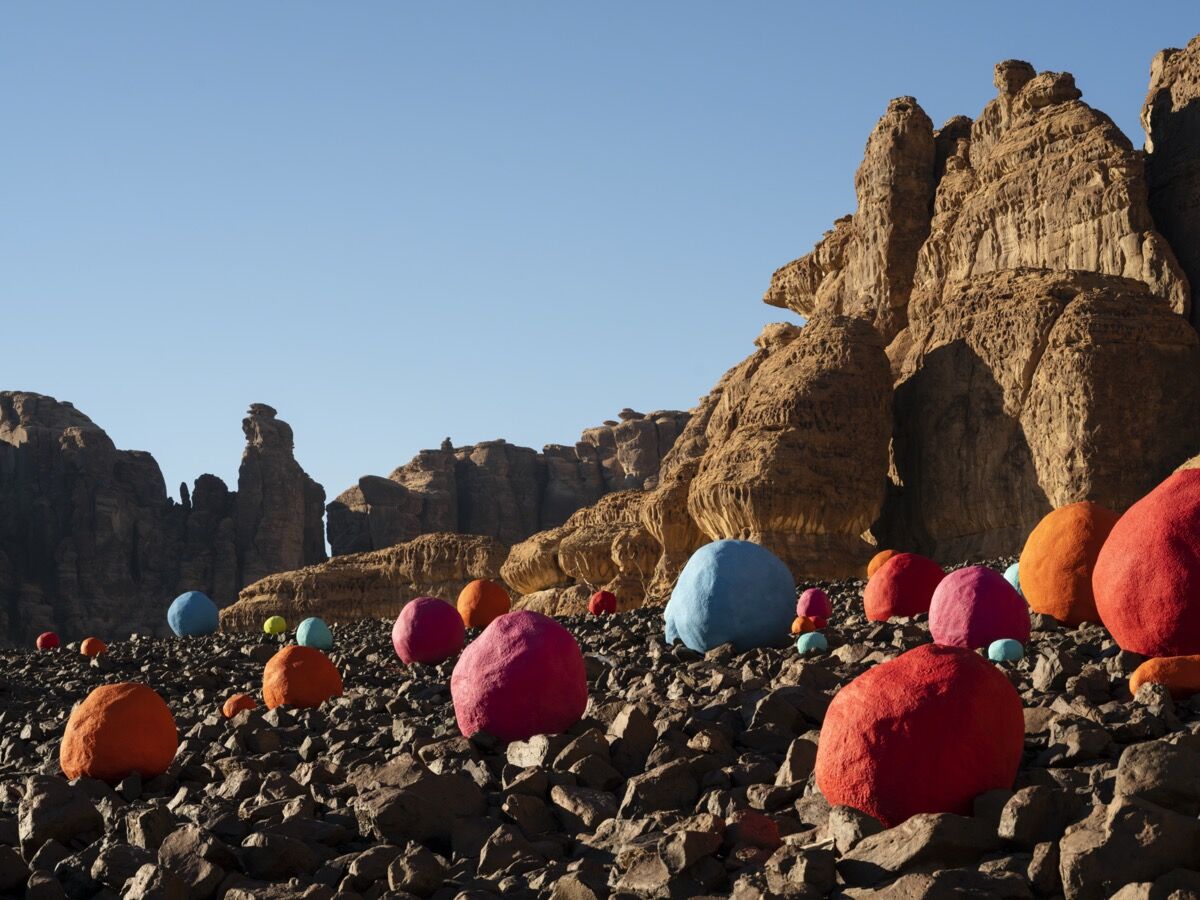 “In January 2020, 14 artists arrived in the northern desert of Saudi Arabia to oversee the installation of their artworks for a project titled Desert X AlUla. The artists were asked to respond to the location and its residents, keeping in mind that all artworks were temporary and, once removed, must leave no trace on the environment.
“The project was a result of a collaboration between Desert Biennial, a not-for-profit art organization based in California, and the Royal Commission for AlUla, a Saudi Arabian governmental entity tasked to protect and develop the heritage sites of Hegra, an ancient city dating back to 1 AD.
Desert X AlUla 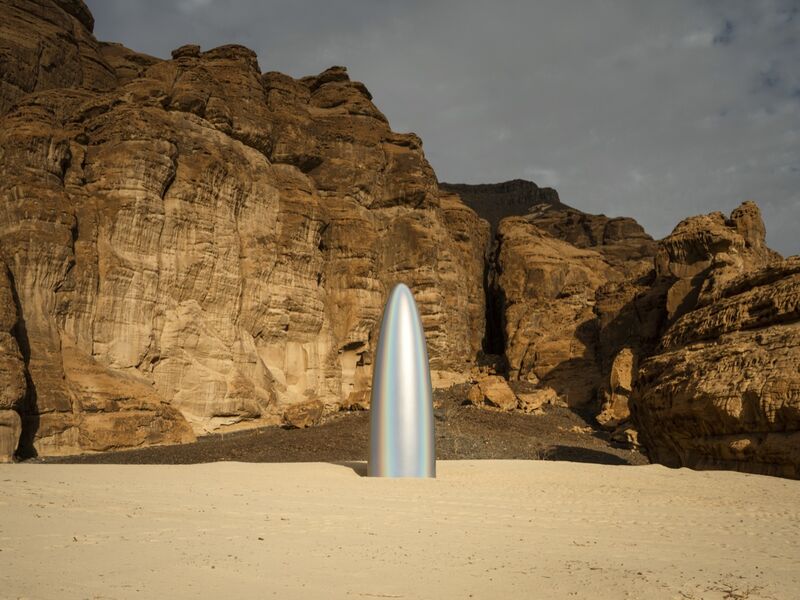 “Co-curated by Raneem Farsi, Aya Alireza, and Neville Wakefield, the invited artists explored themes of the cosmos and astronomy, water scarcity, Bedouin heritage, trade, capitalism, and oil.
“Desert X AlUla not only brought to focus the unique environments found in deserts, but it also unveiled new ways of making art that engaged and activated the local community. Working under extreme conditions and a remote location, the artists were able to have a successful collaboration and a thoughtful set of artworks realized.”
—Manal AlDowayan

“This is one of many Black Lives Matter murals that have peppered the streets of cities across the United States since the murder of George Floyd by police and many others before him. This 600-foot mural is near 1 Police Plaza, the U.S. Immigration and Customs Enforcement Office, the U.S. Federal Courthouse, the New York Supreme Court House, the Manhattan Detention Complex, and City Hall—all institutions that have contributed to and as a result can correct the systemic racism that continues to plague Black, Indigenous, and People of Color. The three artists who created the work represent the spectrum of the Black community, which varies in immigration status, religious background, class, and sexual orientation, emphasizing that All Black Lives Matter.”
—Kendal Henry, artist and curator

You can read the rest of the article: www.artsy.net/article/artsy-editorial-best-public-art-2020.

Stay tuned for more top 5 of 2020, it’s gonna be a pretty busy few days! Enjoy the rest of your Monday, be safe, be healthy, be blessed!

Featured and other images: Artsy.net & Biennale of Sydney

5 Basic Elements Every Great Story Must Have – Courtney Miller

Sonic Frontiers: Answering Your Questions About Cyber Space and More