Hello and good weekend everyone! Decided on a whim to try a different kind of update. I usually get newsletters from the LA Times from their arts section. What they have is interesting, so today I decided to pass this along to you. See if you like it. A special thanks to Carolina A. Miranda from the LA Times.

Greetings, earthlings. I’m Carolina A. Miranda, staff writer at the Los Angeles Times, and this week I come to you with lots of essential culture news and a whole lot of hammer:

On Wednesday, the German ambassador to the United States, Emily Haber, posted an image of the philosopher and theorist Hannah Arendt to Twitter, noting that one of Arendt’s many legacies was recognizing that “totalitarianism can flourish where people systematically refuse to engage with reality and are ready to replace reason with ideology and outright fiction.”

It read like a massive subtweet of U.S. society, which as of late has slid — or leapt? — straight into a pool of digital disinformation and unreality. We do, after all, have a president who has praised the fictions of QAnon (“these are people that love our country”), and recently various social media companies have changed the ways in which they function so as not to completely destroy our election process. (Which leads me to wonder what their functions are doing to us the rest of the year.)

An illuminating piece by Andrew Marantz, published this week in the New Yorker, plumbs the depths of Facebook’s content-moderation policies. Facebook flacks say blocking the hate can be like “looking for a needle in a haystack.” Marantz writes, “This metaphor casts [Mark] Zuckerberg as a hapless victim of fate: day after day, through no fault of his own, his haystack ends up mysteriously full of needles. A more honest metaphor would posit a powerful set of magnets at the center of the haystack — Facebook’s algorithms, which attract and elevate whatever content is most highly charged.”

How did we get here? I’ve been finding some answers in Joanne McNeil’s recent book “Lurking: How a Person Became a User,” a thoughtful examination of the evolution of the culture of the internet over time. 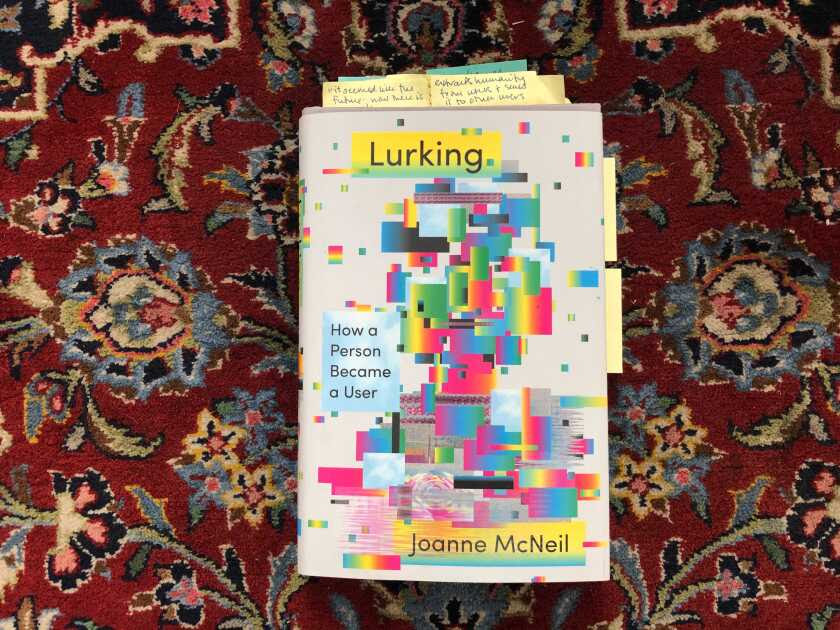 My well-thumbed copy of “Lurking: How a Person Became a User” by Joanne McNeil. The book was published by Farrar, Straus, and Giroux in February. (Carolina A. Miranda / Los Angeles Times)

The book chronicles the instincts that powered early chat rooms, GeoCities pages, and the creation of digital identities, as well as poignant internet artworks and niche communities. It also charts the corporate internet: the advent of search, the rise of mass social media sites (remember Friendster and MySpace?) and our current Facebook dystopia — from its awkward aesthetics (“it looked as if a government body were running it”) to its ham-handed ways of regulating identity, requiring users to employ “authentic” names.

One incredible story: The site was deactivating the pages of Native American users with surnames like “Iron Eyes” (sometimes at the urging of white supremacists) because they didn’t seem “real” to content moderators.

McNeil attributes some of Silicon Valley’s impunity toward truth (and basic humanity) to a failure of criticism. Essentially, a lack of smart critical writing about these platforms during the key early years when they still might have been browbeat into doing less evil. “The media — including culture critics — should have focused on issues of user consent, monopoly power, harassment, and all of the internet’s actual problems,” she writes. “Instead, the internet haters of the highbrow persuasion flaunted their ignorance.” The business pages, in the meantime, delivered “fanboyish reporting.”

In other words, the photos of breakfast that some thinkers spent a lot of wordcount pooh-poohing as irrelevant? They were irrelevant. It was the architecture that delivered them to our lizard brains that was far more insidious.

“Lurking” is a curious, low-key guide to the culture(s) of the internet — McNeil was there in the early days and is the sort to revisit old chat rooms years later because, why the hell not. The book also shows how web companies have inhaled us all. “Even Comcast lets you call in — that’s not anyone’s idea of fun, but you can call and ask a human a question,” she writes. “Comcast has customers. Google has users.”

On the internet, of course, we are the product.

Find McNeil’s book here. And while you’re at it, sign up for her newsletter, All My Stars. It’s a personable, irregular update of whatever happens to be traversing her wonderful, curious brain.

Aaaaaand, the Tony Award nominations are in…. but they’re kind of a bust, writes Times theater critic Charles McNulty. Because of the pandemic, they are highly abridged — with only 18 shows deemed eligible. Plus, given the moment, it’s not exactly the best time “to be doling out congratulatory Broadway bric-a-brac,” he writes. “If the American Theatre Wing was a little more on the ball, it would be using this moment for an all-star digital telethon for theater workers anxious about their next meal.”

Ashley Lee compiles the complete list of noms. She reports that the musical “Jagged Little Pill” is in the lead (15 nominations), followed by “Moulin Rouge! The Musical” (14) and “Tina: The Tina Turner Musical” and “Slave Play” (12 each). Plus, Aaron Tveit, who plays the lovelorn writer in “Moulin Rouge!,” is the only nominee for best performance by an actor. But he could still lose, reports Lee.

Radha Blanks’ “The Forty-Year-Old Version” on Netflix is the story of a Black playwright who has to contend with a countless microaggressions and aggression-aggressions to get her work on stage. Blank tells Ashley Lee that some viewers think the character of the clueless white producer in the film is a caricature, but he’s based on real-deal theatrical artistic directors. “With these predominantly white male gatekeepers,” says Blank, “it’s the same kind of person making the same type of choices, controlling what kind of diverse stories are told.”

That inspired Lee to speak to 40 Black theater workers to share their experiences in theater. As playwright Jocelyn Bioh tells her: “This pushback against the whole system — these are conversations that artists of color have been dying to have for years.” 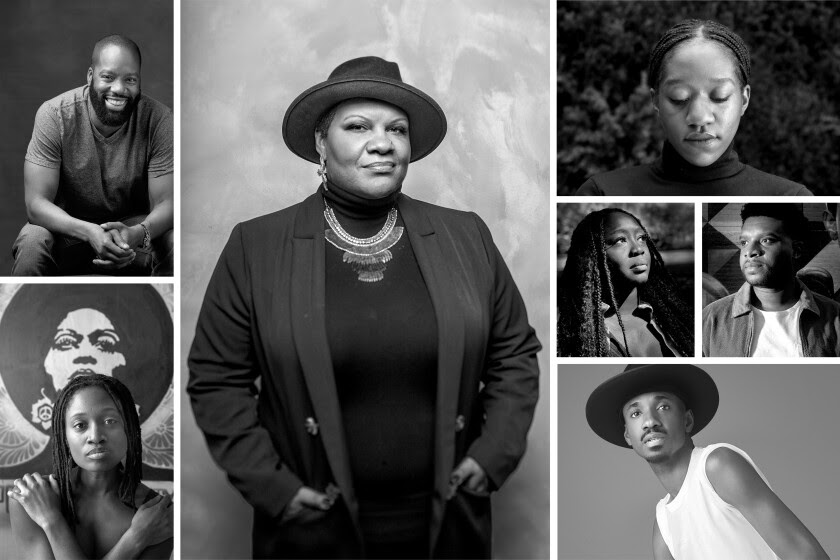 Plus, Times film critic Justin Chang reviews Blank’s movie. “The sly achievement of ‘The Forty-Year-Old Version’,” he writes, “is to turn a critical eye on the very idea of success (by whose standards?), and to ponder exactly what level of compromise is acceptable to secure it.”

Over at the Undefeated, critic Soraya Nadia McDonald describes it as a “refreshing, unpretentious and often hilarious take on middle-aged Black womanhood.”

Because we don’t get enough COVID-19 in real life, Shia LaBeouf’s Slauson Rec. Theater Company has developed a play inspired by a day in the life of a COVID-19 testing center. Titled “5711 Avalon,” the collectively written work is staged to look like an actual testing site while audiences remain in their cars. The Times’ Deborah Vankin took one for the team and attended a rehearsal, which featured a lot of yelling by LaBeouf, along with various meltdowns. Sample: “No-no-no-no-no!”Plays and players

Read this one to the end. 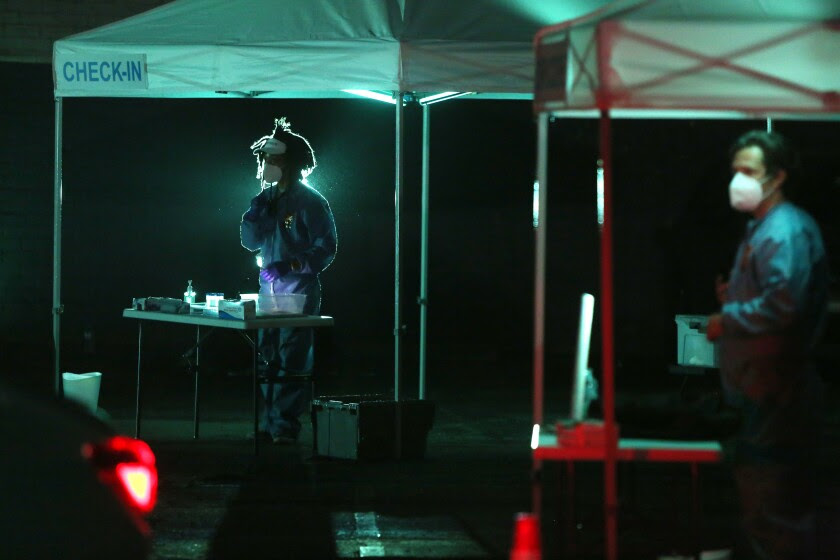 Heidi Schreck’s “What the Constitution Means to Me” premiered this week on Amazon Prime Video. Charles McNulty is offering it up as essential viewing for the Republican senators involved in confirmation proceedings for Supreme Court nominee Amy Coney Barrett. Schreck’s “discussion of constitutional history is full of humor and light,” writes McNulty, “but behind it lies an emotional awareness of the direct impact the male-dominated Court has had on the liberties and possibilities of women.”

Plus, Times art editor Craig Nakano hosted a conversation between Schreck and television director Norman Lear. “What the Constitution Means to Me” was inspired by the format of American Legion oratorical contests. Lear, the force behind socially-minded TV series such as “All in the Family” and “The Jeffersons,” also participated in these contests. Particularly moving: a section where the pair talks about the episode of “Maude” in which Maude (played by Bea Arthur) gets an abortion. 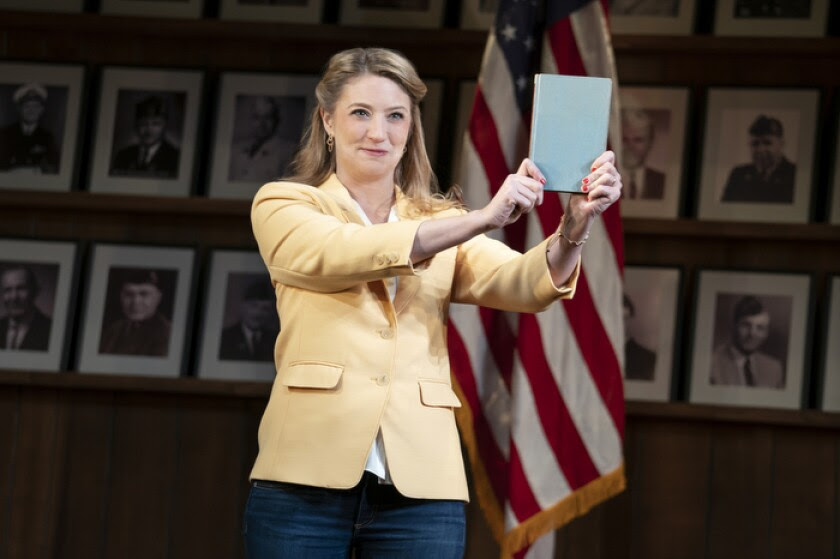 Heidi Schreck in a scene from “What the Constitution Means to Me.” (Joan Marcus / Amazon Studios)

Meanwhile on the East Coast: the Baltimore Art Museum announced the deaccession of canvases by Andy Warhol, Brice Marden, and Clyfford Still to fund an endowment to correct pay inequities at the museum earlier this month. Now a group of 23 prominent supporters of the museum, including former trustees, have written a missive to Maryland’s attorney general and secretary of state to demand that they put a stop to the sale. Art critic Christopher Knight describes the letter as “blistering and closely argued.” Among other things, it states the museum “did not sufficiently exercise its fiduciary duty” and that the canvas by Warhol “is likely being sold, or already has been sold, at a bargain-basement price.”

Enjoying this newsletter? Consider subscribing to the Los Angeles Times

Your support helps us deliver the news that matters most. Become a subscriber.

Contributor Sharon Mizota checks out the annual “Womxn in Windows” exhibition, which “feels made for our socially distant moment.” The exhibition consists of 10 works by eight female artists and filmmakers — including Ja’tovia Gary, Everlane Moraes, and Rémie Akl — that play in storefront windows in Chinatown 24 hours a day.

Plus, artist Nina Katchoudourian has turned an Orange County lawn into a political art installation — of lawn signs from failed presidential campaigns. After the election on Nov. 3, one losing candidate’s sign will be added to the show. The signs, Katchadourian tells Daily Pilot reporter Vera Castaneda, are “so particular to a North American landscape before an election.” 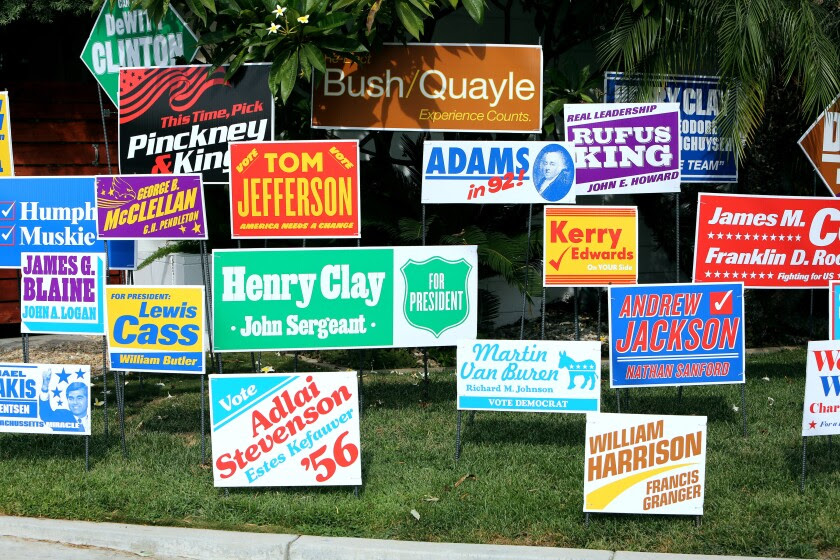 Some of the signs put up for the “Monument to the Unelected” art installation by Nina Katchadourian in Orange. (Raul Roa / Daily Pilot)

The Times’ Matt Cooper has all the culture happenings! This includes 18 picks for weekend culture, including a virtual concert by the Pasadena Symphony and an online reading of Gore Vidal’s “The Best Man” featuring Morgan Freeman, Matthew Broderick, and Zachary Quinto.

Plus, he rounds up eight things you can do in person, including an outdoor performance of Jon Lawrence Rivera’s “March” staged by the Los Angeles LGBT Center and Playwrights’ Arena — part of their “Garage Theatre” collaboration.

Chris Killip, a British documentary photographer known for his chronicles of working-class struggles in northeast England during the 1970s and ‘80s, has died at 74.

In 2017, the Getty Museum had a terrific show of his work and I had the occasion to talk to him: “They are at the tough end of things, the people in my photographs,” he told me at the time. “It’s about the struggle for work, being out of work, fighting for work.” 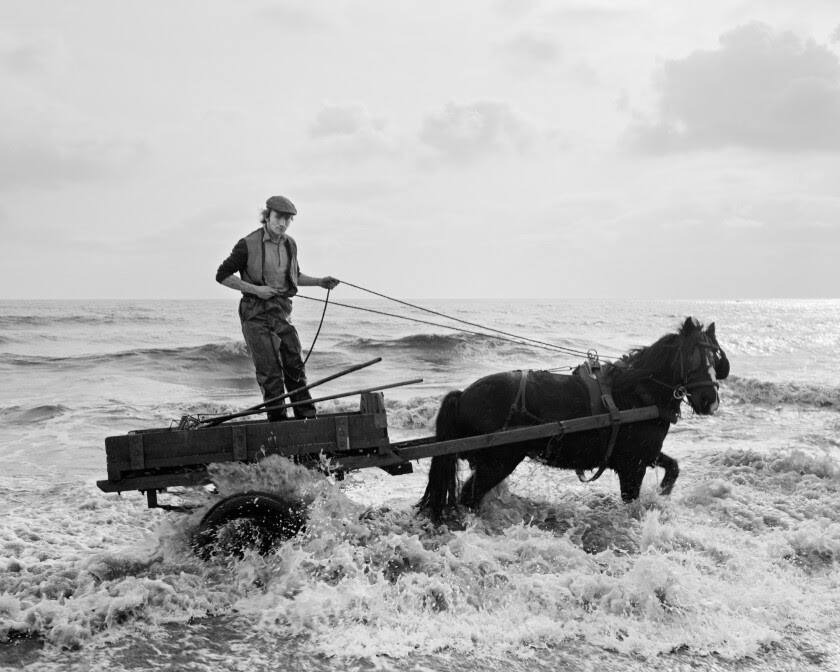 — Artists Christine Sun Kim, filmmaker Rodney Evans, and dancer Jerron Herman have been awarded the inaugural Disability Futures Fellowship, worth $50,000.
— How painter Amoako Boafo went from little-known painter to art star. An absolutely wild story by Nate Freeman about art and hype and wealthy art flippers.
— The Getty has added 39 Dutch drawings to its collection. Personally, I am here for any and all illustrations of flora and fauna by Maria Sibylla Merian.
— A short history of Sears department store buildings in L.A.
— The pandemic has wreaked havoc on an icon of Los Angeles: Olvera Street.
— A new fellowship will explore the history of slavery at the White House.
— 102 symbols of the Confederacy have been removed from public spaces since George Floyd’s death.
— The California Historical Society has some great images related to the farmworker newspaper “El Malcriado” and other 1960s-era ephemera connected to the movement.
— Hank Willis Thomas gives Alfred Barr Jr.’s abstract art chart a Postcolonial update.
— And I love love love New York Times food critic Tejal Rao’s compilation of Los Angeles smells.

Last but not least …

So what do you think? Does this interest you? Do you want to see more? Yeah or Nah? I will leave that entirely up to you! Got another post to send…

This site uses Akismet to reduce spam. Learn how your comment data is processed.