We are continuing our best of 2019 with theater. West End theater in London or Broadway in NYC, there are always good theater performances to choose from. Unfortunately, I didn’t have the time to really see a play. Hopefully in the year 2020 that will change. The Hollywood Reporter and Time have their list of great theater performances.

It’s been a sleepy fall on Broadway, with few real surprises to galvanize the 2019-20 theater season. But enough strong holdovers from the spring nonetheless made it tough to carve out a list of just ten standouts.

The majority of the more ground-breaking works, as usual, have come from off-Broadway, some of them, like Oklahoma!, Slave Play and What the Constitution Means to Me, which made my Top 10 last year, moving uptown to expand their audience.

Other memorable plays have included Adam Rapp’s hypnotic mystery The Sound Inside, about fictions written, read and lived, directed with a surgeon’s precision by David Cromer and featuring probing work from Mary-Louise Parker at the height of her powers.

Despite its flawed third act, Samuel D. Hunter’s Greater Clements is a shattering elegy for people and communities dissolving into a landscape chewed up and then abandoned by industry, driven by wrenching performances from Judith Ivey and Edmund Donovan as a single mother and her troubled son in an Idaho mining town.

In The Michaels, Richard Nelson continued his invaluable Rhinebeck Panorama, a micro-macro Chekhovian study of the personal and political questions of our time, marking the eighth play in this exquisitely naturalistic series, with one more to come.

For sheer exuberant entertainment, it was hard to top Moulin Rouge! The Musical, a show so gleefully inebriated on its own excesses that resistance was futile. And thanks to a genuinely funny book by Robert Horn that updated the material in smart, resourceful ways — not to mention a terrific ensemble led by Santino Fontana in the Dustin Hoffman role — Tootsie delivered more laughs than any show this year, making its underwhelming commercial performance a major disappointment.

Top of the roster of shows I’m looking forward to in early 2020 are an all-new West Side Story from iconoclastic director Ivo van Hove; Ruth Negga making her American stage debut in the title role of Yael Farber’s production of Hamlet; Marianne Elliott’s gender-flipped revival of Company, starring the sublime Katrina Lenk from The Band’s Visit; and a chance to revisit Conor McPherson’s Depression-era tone poem set to the songs of Bob Dylan, Girl From the North Country, when it moves to Broadway.

Director Daniel Fish’s audacious revisionist take on the corn-fed 1943 Rodgers & Hammerstein classic exposes the disturbing subterranean violence in the soil of the American heartland, its radically altered dramatic perspective matched by transformative reshaping of the melodic score to enhance its accents of country, folk, and bluegrass. A haunting rethink that was impossible to shake.

A year after Bruce Springsteen used the intimacy of a Broadway house to personalize the rock-god concert experience, former Talking Heads frontman Byrne breaks the mold again with this career-spanning show, a jolt of pure, brainy bliss that gives you a new appreciation for the way music is made and its therapeutic properties in troubled times. Can someone please bring in Kate Bush’s 2014 Before the Dawn London concert residency next?

In his smoldering revival of Harold Pinter’s reverse-chronology dissection of an adulterous love triangle, Jamie Lloyd placed three laser-focused actors — Tom Hiddleston, Zawe Ashton, and Charlie Cox — against a stark backdrop and gave them no place to hide, causing every hurt and humiliation to land like knife wounds. Devastating.

All the critical hosannas flung at Phoebe Waller-Bridge’s Amazon series about a compulsively sexual, chronically self-sabotaging Londoner were justified, but this belated New York debut of the hour-long confessional character study that spawned it revealed the purest essence of that wry comedic genius laced with time-release sorrow.

Three superlative actors — Simon Russell Beale, Adam Godley, and Ben Miles — play the brothers that founded the financial empire, along with their spouses, descendants, and successors over more than 160 years in Stefano Massini’s sprawling novelistic saga of American capitalism, directed by Sam Mendes like a maestro conductor. The epic play transfers to Broadway in spring 2020.

After countless revivals and tours of the enduring 1964 Bock and Harnick musical about a Jewish shtetl in Imperial Russia, director Joel Grey unearthed startling new life in the characters of Sholem Aleichem with this lovingly mounted production in Yiddish, led with piercing soulfulness by Steven Skybell as a Tevye for the ages.

I came late to it in a return engagement, but Jackie Sibblies Drury’s form-busting Pulitzer Prize winner lived up to its accolades. This daring deconstruction morphs from sitcom via sardonic commentary into full-blown chaos, ripping the rug out from under the audience as it extricates African American experience from the white gaze.

Inspired by Howards End and featuring novelist E.M. Forster as a spiritual godfather character, Matthew Lopez’s ambitious two-part drama, directed with surging physical and emotional vitality by Stephen Daldry, is a deeply felt examination of 21st century gay New Yorkers and the debt they owe their predecessors, who hid in the shadows, fought on the frontlines of queer activism and died in the AIDS epidemic. Oh, and can we please just give Lois Smith the featured actress Tony right now for her impeccable work tying everything together in the second play’s concluding scenes?

Truth be told, I have mixed feelings about Jeremy O. Harris’ tricksy dissection of race, sexuality, power and the scars of historical trauma, which trips up on a self-indulgent midsection too clever by half. But the playwright is a blazingly transgressive voice and this ballsy provocation, performed by a fearless cast, deftly balances ferocious humor with squirming discomfort, making it a welcome arrival on generally risk-averse Broadway.

Here is Time’s List of The 10 Best Theater Performances 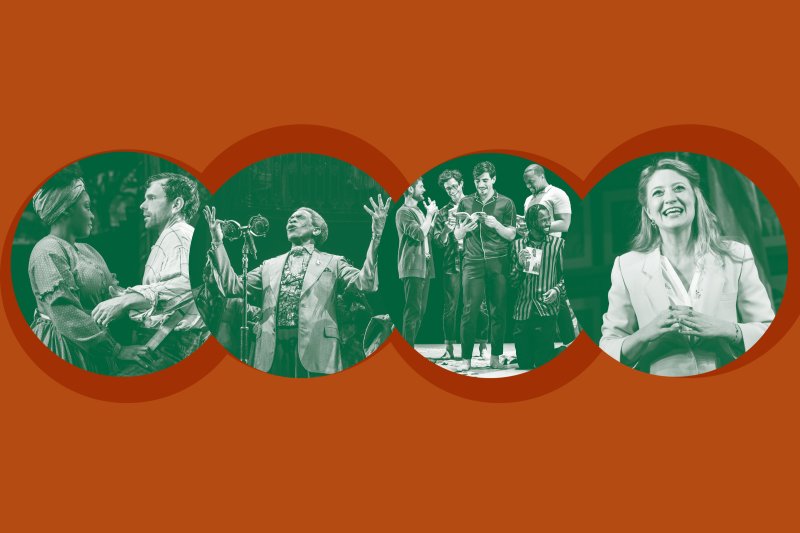 Enjoyed the best in theater this year? Did you have another play that should’ve been on the list? Let’s look at three more from literature, tv, and photography.