Evening all! Did you think that I would forget about what this month is? Of course not, but I do want to put together some things. Alfred Hitchcock is one of my favorite film directors, so it would be fitting to tell you what my favorite Hitchcock films are… 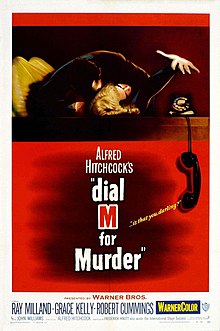 Ex-tennis pro Tony Wendice (Ray Milland) wants to have his wealthy wife, Margot (Grace Kelly), murdered so he can get his hands on her inheritance. When he discovers her affair with Mark Halliday (Robert Cummings), he comes up with the perfect plan to kill her. He blackmails an old acquaintance into carrying out the murder, but the carefully-orchestrated set-up goes awry, and Margot stays alive. Now Wendice must frantically scheme to outwit the police and avoid having his plot detected.

Dr. Ben McKenna (James Stewart) is on vacation with his wife (Doris Day) and son in Morocco when a chance encounter with a stranger sets their trip, and their lives, on a drastically different course. The stranger, killed in front of the family in the marketplace, reveals an assassination plot to the Americans. The couple’s son is abducted in order to ensure the plot is kept secret, and suddenly the mother and father, with no help from the police, must figure out a way to get their child back.

The story of a recuperating news photographer who believes he has witnessed a murder. Confined to a wheelchair after an accident, he spends his time watching the occupants of neighboring apartments through a telephoto lens and binoculars and becomes convinced that a murder has taken place.

Phoenix secretary Marion Crane (Janet Leigh), on the lam after stealing $40,000 from her employer in order to run away with her boyfriend, Sam Loomis (John Gavin), is overcome by exhaustion during a heavy rainstorm. Traveling on the back roads to avoid the police, she stops for the night at the ramshackle Bates Motel and meets the polite but highly strung proprietor Norman Bates (Anthony Perkins), a young man with an interest in taxidermy and a difficult relationship with his mother.

There you have it. My fave films from Hitchcock. Do you have any favorite films from ‘The Master of Suspense’? I know you do.

I hope the rest of your weekend is wonderful, be blessed.

Featured and other images: Wikipedia & Biography.com