Hello…I’m doing something different this month of October. As you know this is the month of costumes, candy, and all things Halloween. I don’t celebrate Halloween at all, but I still like candy, mainly chocolate, but I do love a scary movie. So all this month, every Wednesday, I will pick my favorite scary films. 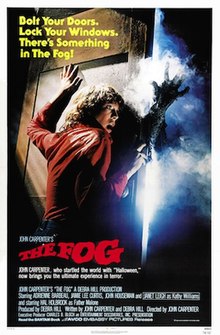 Today I have John Carpenter’s The Fog. This film premiered February 1, 1980, although I discovered this film about several years ago. I probably don’t remember it much growing up. Directed by John Carpenter, the film stars Jamie Lee Curtis, her mother Janet Leigh, Hal Holbrook, Adrienne Barbeau, and Tom Atkins.

Set in a coastal town of Antonio Bay, California, the town is celebrating its 100th anniversary. While the residents are planning to celebrate, a sinister, glowing fog approaches the town, along with a vengeful ghost of mariners, who were killed in a shipwreck along the coast near the town…a hundred years ago.

I can’t really explain why I like the film, I just do. You have a good story, the cast is great, and the fact that Carpenter directed, he appeared in a small cameo, it just makes a great creepy tale.

Yes, it’s available on DVD or Blu-Ray. I have this film and I’ve watched it many times, seriously. I might just watch it again this weekend. Enjoy the rest of your Wednesday, be blessed.