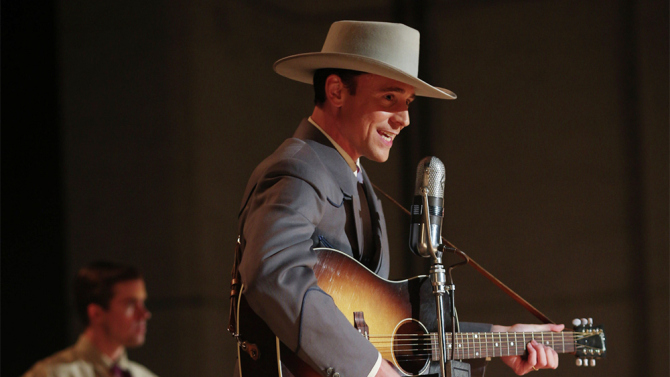 Tom Hiddleston as the late Hank Williams, one of the bright spots on this film.

“You got to have smelt a lot of mule manure before you can sing like a hillbilly.”

What word do I use to describe Hank Williams? A musical genius? A true songwriter? Lost soul? well, you could say all three. I Saw the Light is not just another biopic, but this biopic has failed in many ways than one.

First I will say this, Tom Hiddleston was a great treat to see. An Englishmen playing a country crooner was a surprise. Williams’s grandson Hank III wasn’t too pleased, but who really cares. I wish he could give Hiddleston the credit for the hard work to portray such a legend in country music and what a legend. Not only did the film did touch about William’s as a great performer, but it also touched on his demons. His spinal condition called Spina bifida, caused him lifelong pain, and the fact that this was one of the cause for his abuse of drugs and alcohol didn’t make it any easier. Hiddleston’s work has paid off greatly. It also helped that he did his own singing in the film, that was one of the highlights.

Elizabeth Olsen, who portrayed William’s first wife Audrey, was also a great addition. Audrey wanted to have a career in music as well. Even though she lacked vocal talent, that wasn’t going didn’t stop her. When you see Hiddleston and Olsen together, that’s pure chemistry right there. The relationship between Hank and Audrey had it’s highs and terrible lows, due to his drinking of course.

There is one problem I have with this film. Based on Hank Williams: The Biography by Colin Escott, with George Merritt and William MacEwen, there are some issues.

Marc Abraham, who not only directed, but also written and produced the film failed to bring what the film really needed and that is the heart. When you do a biopic, aren’t you supposed to let audiences know how the person become who he or she was? What truly made Hank the way he was? That’s not the case here. Abraham though that Hank’s humble beginnings didn’t really matter. To be honest, Abraham just cheated not only the audience, but the actors. Hiddleston’s and Olsen’s performances we’re spot on, it just wasn’t enough to save this film.

While I do feel that the film was great, it could’ve been a whole lot better.

I Saw the Light: C

New blog posts are up and running. Check the blog in the bio link to see all the music festivals that have been canceled or postponed. #newblogposts
#Repost @fangoria • • • • • • It's no joke! Here's your Fango-approved guide to all of the horror movies coming to streaming this month. What's first on your watchlist?
From Ty Carter Art... Hey Guys!  I hope this message finds you well. I know many of us are in isolation (me included)! For this week only, I’m offering 30% OFF for my entire gumroad shop. Use code: ELBOW_BUMP! Stay safe and healthy, Ty #art #artitsontumblr #artclass #drawingtutorials #paintingtutorials #colorandlight #visdev #illustration #tumblrradar #colortheory #tycarterart
Join Zack Snyder tomorrow on VERO for a BvS live commentary. #BvS4Years https://t.co/0GEwZLxBVH Get the VERO app if don't have it. Google play or Apple. #batmanvsupermandawnofjustice #zacksnyder #dccomics #dcuniverse
by haim steinbach Image source: unknown #art #haimsteinbach
Black Brother, Black Brother (2020) Sometimes, 12-year-old Donte wishes he were invisible. As one of the few black boys at Middlefield Prep, most of the students don't look like him. They don't like him either. Dubbing him "Black Brother," Donte's teachers and classmates make it clear they wish he were more like his lighter-skinned brother, Trey. When he's bullied and framed by the captain of the fencing team, "King" Alan, he's suspended from school and arrested for something he didn't do. Terrified, searching for a place where he belongs, Donte joins a local youth center and meets former Olympic fencer Arden Jones. With Arden's help, he begins training as a competitive fencer, setting his sights on taking down the fencing team captain, no matter what. As Donte hones his fencing skills and grows closer to achieving his goal, he learns the fight for justice is far from over. Now Donte must confront his bullies, racism, and the corrupt systems of power that led to his arrest. Powerful and emotionally gripping, Black Brother, Black Brother is a careful examination of the school-to-prison pipeline and follows one boy's fight against racism and his empowering path to finding his voice. by Jewell Parker Rhodes (Author) Get it on Amazon Jewell Parker Rhodes is the author of Ninth Ward, winner of a Coretta Scott King Honor, Sugar, winner of the Jane Addams Children's Book Award, and the New York Times-bestselling Ghost Boys. She has also written many award-winning novels for adults. When she's not writing, Jewell visits schools to talk about her books and teaches writing at Arizona State University. [SuperheroesInColor faceb / instag / twitter / tumblr / pinterest / support ] #literature #book #jewellparkerrhodes #blackauthors
Been blogging furiously for the past two days. Go to the blog site, located in the bio link for things all creative.
Celebrating Women in Movement...Judith Jamison #Repost @ozzysalvatierra • • • • • • @lykkeli Gunshot II #judithjamison #alvinailey #passion #expression #research #feelit #sweatit
We are celebrating Women's History Month. All things creative. Today we have women in art. Top Left: Rachel Gregor rachelgregor.com Bottom Left: Miu Miu Fall ‘16,  Manjit Thapp manjitthapp.co.uk Right: Portrait of Din #5 2016, Mickalene Thomas  mickalenethomas.com Source: women in art history #womenartists #womenshistorymonth #rachelgregor #manjitthapp #mickalenethomas #womenofcolor #art #illustration
#Repost @bnw_epic • • • • • • Paris, France ✨ Featured Artists: Model: @msalekwek | Photo: @luigiandiango | Hair: @luigimurenu | Makeup: @georgisandev | Gown: @irisvanherpen ✨ . . ________________________________________________ ✨✨ CONGRATULATIONS! ✨✨ ________________________________________________ . . ✨✨✨ You are on your way to become a member! 5 features by EPIC makes you a member. ✨✨✨ . . Selected by: @kathrinfederer.ch . . Please, visit our friends hubs: @bnw_switzerland @bnw_workers @bnw_master @ig_shotz_bw . . ~ For internal use only: #bnw_epic_multiple_artists ~ . . #bnw_planet_2020#bnw_drama#bnw_madrid#bnwmood#bnwsouls#bnw_globe#blackandwhitephotography#bnw_rose#monochrome#bnw_greatshots#bodylanguage#bnw_demand#flair_bw#INFINITY_BNW#bnw_daily#bnw_magazine#bnw_captures#Gottolove_BNW#bnwMagic#bw_addiction#bnw#ig_shotz_bw#bw_addiction#bnw_of_our_world#bnw_daily#bnw_switzerland#luigiandiango #irisvanherpen #bw_perfect #voguebrasil